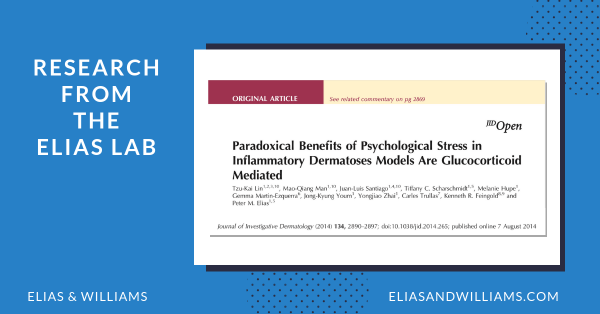 In earlier posts we showed  how psychological stress can be potentially harmful to both the skin’s barrier, and to our antimicrobial defenses. But there are also ways in which stress is good for us.

Indeed, one way that it’s helpful has been known for many decades, thanks to the pioneering work of Hans Selye and for which he received a Nobel Prize. We are programmed to respond to new threats from the environment – such as attacks by predators or surprise assaults by enemies – with the classic, ‘fight or flight’ stress response. These types of alarms cause a prompt release of the hormones, adrenaline and steroids (‘corticosteroids’, that is), which quickly generate the additional energy we will need to escape or confront such threats.

Our lab recently discovered another way in which stress can be helpful in certain situations. In medicine, it is been widely assumed that chronic and/or excessive stress is harmful. Stress is well-known to trigger or exacerbate inflammatory diseases. Yet, when we tried to prove that stress would also make inflammatory skin diseases worse, we failed. For these studies we took mice with irritant or allergic contact dermatitis, or with an atopic-like dermatitis and subjected them to the stressful conditions described in an earlier post. Instead, of making their dermatitis worse, we were astonished to discover the opposite! When we stressed these animals with ‘diseased skin’, they actually got better!

It did not take us long to discover the reason. Through our earlier studies on stress and the barrier, we had learned that that the harmful effects of stress were mediated by cortisone. The jolt of cortisone that is released by the body under stressful conditions is bad for the skin’s barrier and its antimicrobial defenses. We knew this because when we blocked the cortisone receptor – the chemical switch whereby cortisone mediates its effects –stress no longer caused any change in barrier function or antimicrobial defenses. By blocking cortisone, the barrier remained normal, even in the face of ongoing stress.

Because cortisone-containing medications are the mainstay for treating these inflammatory dermatoses, it seemed logical to suspect that the paradoxical improvement in the rashes on our stressed mice with dermatitis could be due to such a sudden, stress-induced release of cortisone. To prove this, we once again repeated our experiment, but this time in addition to stressing our mice with inflammatory skin conditions, we at the same time gave them a drug that blocks the cortisone receptor. And once again we were able to block the effects of stress on the skin – but this time we blocked its benefits! The dermatitis on our mice became worse when they were subjected to stress but unable to respond normally to a burst of cortisone – because we had blocked the hormone’s actions.

Then, we realized that we might have discovered another reason why this response had been retained during evolution. Back in the era when this response first evolved, our modern-times cortisone drugs were not available. The stress response by releasing cortisone can function as a built-in, dispensing pharmacy to deliver the well-known, anti-inflammatory benefits of steroids.

This does not mean that stress is necessarily a good thing for people with inflammatory skin diseases. We are confident that many who suffer from these would beg to differ. But it does help us to understand why we have a stress response that seems to be triggered by much more subtle stimuli that a wolf at the door or impending battle for our lives. There must be some reason why we deliver a bolus of cortisone to our cells when we are sick with a virus or when experiencing physical or psychological pain. Cortisone’s anti-inflammatory effects are one of those broader benefits of stress.

Who is at risk? Many people are prone to develop dry skin. Examples include those who have or … END_OF_DOCUMENT_TOKEN_TO_BE_REPLACED

An alarming percentage (about 60%) of normal adults, mostly women, self-report that they regularly … END_OF_DOCUMENT_TOKEN_TO_BE_REPLACED

Skin's Many Barriers And How Climate Change May Affect Them Skin has many barriers: it keeps us … END_OF_DOCUMENT_TOKEN_TO_BE_REPLACED

Q: I have developed dry skin from COVID-19 because I have to wash my hands so often. Hand sanitizers … END_OF_DOCUMENT_TOKEN_TO_BE_REPLACED

We have learned a lot about skin and its permeability barrier in recent years.  Here are our … END_OF_DOCUMENT_TOKEN_TO_BE_REPLACED

We have learned a lot about skin and its permeability barrier in recent years.  Here are our … END_OF_DOCUMENT_TOKEN_TO_BE_REPLACED