The skin under the dark fur of most mammals  is pale or non-pigmented. Polar bears are an interesting exception to this rule – they have reversed the dark hair/light skin paradigm: their white hairs provide camouflage against the snow and ice, while their pigmented skin can absorb what little warmth the Arctic sun provides.  Ancestors of modern human, like other primates, also had pale skin under their dense coats of pigmented hair.

These human ancestors lived deep in the tropical rainforests of central Africa, daring not to venture into the open grasslands, where herds of antelope and other rich sources of protein grazed, for fear of overheating in the blazing light of the equatorial sun.  But their brains were growing, and their forest diet of fruit, seeds and insects did not contain sufficient protein to fuel the growth of their enlarging brains. To facilitate their ability to hunt for game on the savannahs,  sweat glands spread out from their predominant location on the palms and soles of their predecessors to cover their skin surface.   The cooling effects of sweating allowed them to dissipate heat, and, another adaptation – the shedding of their heavy, insulating pelt – facilitated its evaporation.  These two adaptations – sweating to cool the body and the loss of fur – facilitated their active hunt for game on the savannahs. 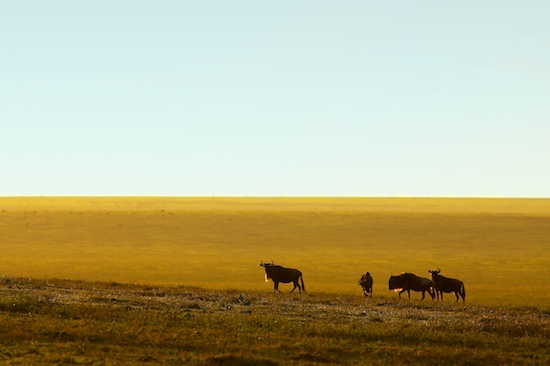 But now, these human forbears faced another obstacle – the loss of body water that accompanies sweating, if coupled with an inefficient skin barrier,  could threatened them with dehydration.  Without a tight skin barrier, even with the capacity of sweat and an efficient  surface for evaporation produced by their near hairless skin, they would not have been able to venture far from the nearest waterhole in the intense heat and low humidity of the equatorial savannahs of that era.

In a recent paper we  hypothesize that skin pigmentation darkened not only to protect it from the toxic effects of intense sun exposures, but even more importantly,  to provide a superior permeability barrier.  The development of skin pigmentation endowed the epidermis with a superior barrier and would have permitted these early prehumans to range out on the open plains at greater distances from available water sources.  Darkly-pigmented human skin not only provides a more competent water barrier than pale skin, it is also more resistant to injury, and even exhibits superior antimicrobial defense, which would have been an important adaptation to life in the ‘infectious soup’ of tropics.  Importantly, these differences are solely pigment or ‘melanin’ related, and are seen in darkly-pigmented populations all over the world.

Bottom line: The permeability barrier to water loss is the most critical function of skin, because our cells are mostly made of water and we live on dry land.  A highly competent skin barrier is especially critical in hot and arid climates – conditions that strongly favor the evaporation of water.  A leaky barrier under these conditions coupled with additional water expenditures through sweating to dissipate heat would have been a recipe for disaster.  Pigmentation of the epidermis provided a means to tighten the skin’s permeability barrier and to improve the survival of early man.

GET OUR PRIMER ON THE SKIN BARRIER

This illustrated booklet offers up-to-date scientific information about skin and the skin barrier in health and disease the skin and how they work to keep us well.

Yes, Send Me the Primer