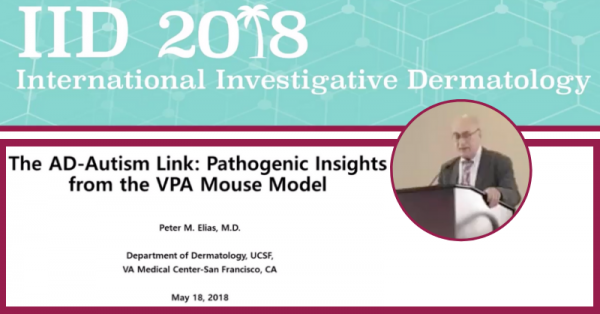 There seems to be little doubt that both autism and atopic dermatitis have become much more prevalent in recent years. In neither disorder is the cause nor the reason for the current epidemics entirely understood. We have addressed the hypotheses concerning the atopic dermatitis epidemic elsewhere on this site.  Recently, several population-based studies have demonstrated an increased incidence of autism spectrum disorders in children with atopic disorders, including atopic dermatitis.

Both autism spectrum disorders and atopic dermatitis have evidence for genetic underpinnings, and both are thought to be triggered by environmental factors. Both disorders also have in common a barrier defect (blood brain barrier vs. skin permeability barrier) and an immunologic component. We have also reviewed the pathogenesis of atopic dermatitis on this site. In the case of the autism spectrum disorders, most authorities propose that they result from neuro-inflammation caused by the migration of circulating inflammatory cytokines across an immature blood-brain barrier during early childhood.

Because of the similarities noted above, and because atopic dermatitis often manifests before autism is detected, we hypothesized that inflammation in atopic dermatitis skin could be contributing to the development of the autism spectrum disorders.

To assess the possible relationship between inflammation in the skin and in the brain, we employed a standard mouse model of autism, in which maternal mice are given the drug, valproic acid, during the mid-stages of pregnancy. Their newborn offspring showed evidence of toxicity in both the brain and epidermis, but, surprisingly, no inflammation was evident at birth. However, by 4 days of age, inflammation was present in both tissues. A skin barrier abnormality could also be demonstrated a few days after birth. Moreover, both epidermis and brain had decreased ceramide content. Reduced levels of ceramides are a well-described feature of atopic dermatitis stratum corneum.

The finding of similar ‘toxic’ changes in both the brain and skin is consistent with the common origin of the brain and epidermis from the embryonic cell layer, the neuroectoderm, that surrounds the developing embryo. The damage to the epidermis then results in a defective barrier and skin inflammation which manifest once the offspring are born.  Exposure to dry air signals a sequence of homeostatic responses directed towards repairing the barrier.

We propose the following sequence is operative here. A defective skin barrier postnatally leads to the production of cytokines in the skin, which signal metabolic responses that restore the barrier, but also produce skin inflammation. Some of these cytokines leak into the circulation, cross the still-immature blood-brain barrier, eventually reaching the brain, where they stimulate the neuroinflammation that is characteristic of ASD.

If this sequence proves correct, it then becomes possible that strategies that correct the barrier abnormality in neonatal patients at risk for atopic dermatitis could prevent or attenuate the subsequent development of autism.

Who is at risk? Many people are prone to develop dry skin. Examples include those who have or … END_OF_DOCUMENT_TOKEN_TO_BE_REPLACED

An alarming percentage (about 60%) of normal adults, mostly women, self-report that they regularly … END_OF_DOCUMENT_TOKEN_TO_BE_REPLACED

Skin's Many Barriers And How Climate Change May Affect Them Skin has many barriers: it keeps us … END_OF_DOCUMENT_TOKEN_TO_BE_REPLACED

Q: I have developed dry skin from COVID-19 because I have to wash my hands so often. Hand sanitizers … END_OF_DOCUMENT_TOKEN_TO_BE_REPLACED

We have learned a lot about skin and its permeability barrier in recent years.  Here are our … END_OF_DOCUMENT_TOKEN_TO_BE_REPLACED

We have learned a lot about skin and its permeability barrier in recent years.  Here are our … END_OF_DOCUMENT_TOKEN_TO_BE_REPLACED